Vegetarianism – the practice of abstaining from the consumption of meat has become a very common lifestyle these days. The reasons people choose to adapt to a vegetarian regime also vary as much as the styles and restrictions of vegetarianism. Some have converted into the veggie life for the health benefits; some would avoid not only meat but also animal products due to medical circumstances. Studies have shown that plant-based meals are generally lower in saturated fat and higher in fiber, and therefore reduce risks of many kinds of disease.

Though it may sound like a very strict diet and perhaps a nightmare to meat-lovers out there, becoming a vegetarian has been so much easier and more accessible lately with a wider range of vegetarian dining options pretty much everywhere. In Indonesia and Bali alone, we are so used to having countless of vegetarian menu on daily basis that most of the time we don’t even realise they are 100% meat-free. Here are some of them:

Tempe and Tahu
When there’s tempeh, there’s tofu – these two, in Indonesia at least, go together alongside each other and are never apart. They are like the national food of Indonesia, as they are inexpensive yet they bring tons of nutrition. It has been stated in many health articles that these duo are super-food, rich in high protein, probiotics and a wide array of vitamins and minerals. Tempeh and tofu are normally served in a variety of Indonesian food, as a side dish, or even a snack. 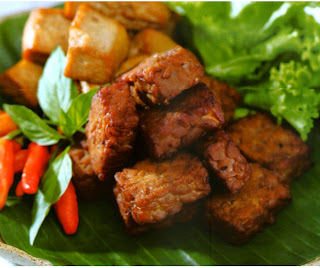 Gado-gado
Gado-gado is one of Indonesia’s most favourites containing boiled, blanched or steamed vegetables (traditionally beans, spinach, bean sprouts, and lettuce), potato, tofu, tempeh, rice cake, topped with peanut sauce dressing. Gado-gado is the very basic form of other “Indonesian salads” that differ from each region of the country – the Balinese version of it is called “Tipat Cantok” that you will find in the resort’s buffet dinner and almost every corner of the island!

Urap
There is another Indonesian green bowl called Urap that can be found in Nasi Campur as one of the side dishes – it could also be consumed on its own as salad. Similar to Gado-gado, Urap is made of steamed assorted vegetables. But Instead of using peanut sauce as dressing, Urap is mixed with shredded coconut, seasoned with ground shallot, garlic, red chili pepper, tamarind juice, galangal, and a pinch of salt. Fancy some Urap for entrée? Come join our Balinese buffet dinner!

Cap Cay
Derived from the Chinese origin – hence the name Cap Cay (pronounced chup-chay) is a mix vegetable stir fry. It is a home-made dish that can easily be found in Indonesian homes and restaurants. Cap Cay is probably one of the healthiest dishes in the world as there are heaps of vegetables, mainly cauli flower, carrots, cabbage and beans, and it is always served a la minute which makes it fresh. For non-vegetarians, Cap Cay also tastes great with some choices of seafood and/ or chicken.

Lontong Sayur
Indonesians love rice like kids love sugar; it is no surprise that a lot of Indonesian dishes are made specifically to be eaten with rice. You will also come across many different types of rice when you go on food-ventures in Indonesia; fried rice, yellow rice, coconut rice, green rice, and a special one that is loved by many – Lontong (also known as Ketupat, or Tipat in Bali). Lontong is a compressed rice cake wrapped in a cylinder shaped banana leaf, and the dish Lontong Sayur is generally a rice cake cut into small pieces served with coconut milk along with some vegetable stew, boiled egg, tofu and/ or tempeh. What’s unique about this Lontong Sayur is the choice of vegetables you may not find in other dishes such as chayote, and some restaurants would also add some Petai (stink beans) 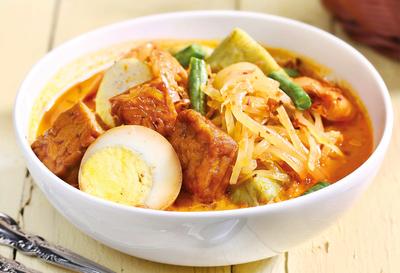